Acne is a common problem which affects people of all age groups. Check out this blog to learn symptoms, risk factors, causes, & preventive care tips to avoid acne. 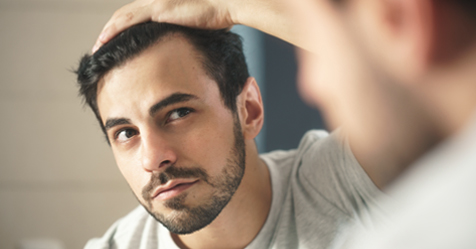 Acne or breakout happens when your hair follicles get blocked with oil, dirt and dead skin cells. It often leads to whiteheads, blackheads or pimples. These annoying bumps generally appear on the face, forehead, chest, upper back and shoulders. Acne affects people of all age groups but is most common among teenagers due to hormonal changes.

Four main factors that lead to acne:
1. Excess oil/sebum production on the skin
2. Hair follicles getting clogged by oil, dirt and dead skin cells
3. Bacteria
4. Excessive activity of hormones (androgens)
5. Puberty
6. Underlying diseases or conditions During puberty, if acne persists for long duration or the severity is high, you should seek medical treatment from a dermatologist.
In some women, acne can persist for a long time, with flares common before menstruation. This type of acne clears up without treatment in women, who use oral contraceptives.
In older adults, a sudden onset of severe acne might be a sign of an underlying disease, requiring medical attention.

Other risk factors:
1. Hormones:
During puberty, androgens are hormones that increase in teenage boys and girls which cause the sebaceous glands to enlarge and form more sebum.
Hormonal changes during pregnancy and use of oral contraceptives can also affect sebum production. If low amounts of androgens circulate in the blood of women, it can worsen acne.

3. Age:
Most common in teenagers.

4. Family history:
Genetics plays a role in acne. If parents had acne, you're most likely to develop it too.

5. Greasy or oily substances:
You may develop acne when on oily lotions and creams which clog the pores and cause acne.

6. Friction or pressure on your skin:
This can be caused by items such as telephones, cell phones, helmets, tight collars and backpacks.

7. Stress or lack of sleep:
Lack of sleep can cause zits, especially on your forehead region.

Also read about - Confessions of corporate life: Stress is real

Treating Acne:
You can get a prescription from a dermatologist. The treatment will:
Control your acne
Avoid scarring or other damage to the skin
Make scars less visible
Reduce pigmentation and spots
Acne medication works by reducing oil production, speeding up skin cell repair, fighting bacteria and reducing inflammation which prevents scarring.
Topical medications:
The most common topical prescription medicines for acne are as follows:
Antibiotics
Antibiotics act on bacteria which reduces inflammation and redness. For the first few months of treatment, the dermatologist may prescribe you a retinoid and an antibiotic. The antibiotic applied in the morning and the retinoid to be applied in the evening. The antibiotics are often combined with benzoyl peroxide to reduce the chances of developing antibiotic resistance. Some common examples are clindamycin with benzoyl peroxide and erythromycin with benzoyl peroxide (Benzamycin). Topical antibiotics alone aren't recommended.

Must read about - Here's what you need to know about Antibiotic Resistance.

Retinoids and retinoid-like drugs
These are available as creams, gels and lotions. Retinoid drugs are derived from vitamin A and include tretinoin (Retin-A), adapalene (Differin) and tazarotene (Tazorac, Avage). It prevents clogging of the hair follicles.
Salicylic acid and azelaic acid
Salicylic acid may help prevent plugged hair follicles and is available as both wash-off and leave-on products.
A 20% azelaic acid cream is as effective as many conventional acne treatments. It is used twice a day for at least four weeks. It's more effective when used in combination with erythromycin. Azelaic acid can be prescribed during pregnancy and while breast-feeding. Side effects may include skin discolouration and minor skin irritation.
Dapsone
Dapsone 5% gel twice daily is recommended for acne with inflammation, especially in adult females. Side effects may include redness and dryness.

Oral medications
Antibiotics
The first choice for treating moderate to severe acne is tetracycline such as minocycline or doxycycline or a macrolide. To prevent antibiotic resistance, oral antibiotics should be used for the shortest time possible. Antibiotics may cause side effects, such as an upset stomach and dizziness. These drugs also increase your skin's sun sensitivity.
Combined oral contraceptives
These are a combination of estrogen and progestin. Its effect can be seen after a long-term, till then antibiotics and retinoids can be used.
The most common side effects include weight gain, breast tenderness and nausea. A serious complication is a slightly increased risk of blood clots.
Anti-androgen agents:
The drug spironolactone (Aldactone) may be considered for women and adolescent girls if oral antibiotics aren't helping. It works by blocking the effect of androgen hormones on the sebaceous glands. Possible side effects include breast tenderness and painful periods.
Isotretinoin:
Isotretinoin (Amnesteem, Claravis, Sotret) is a powerful drug for people whose severe acne doesn't respond to other treatments. Doctors need to closely monitor anyone they treat with this drug because of the potential side effects which include ulcerative colitis, increased risk of depression and suicide, and severe birth defects. In fact, isotretinoin carries such serious risk of side effects that all people receiving isotretinoin must participate in a Food and Drug Administration-approved risk management program.

Therapy
These therapies may be suggested in select cases, either alone or in combination with certain medication.
Lasers and photodynamic therapy
Chemical peel: This procedure uses repeated applications of a chemical solution, such as salicylic acid, glycolic acid or retinoic acid.
Extraction of whiteheads and blackheads: Your doctor may use special tools for gentle removal of whiteheads and blackheads (comedos) that haven't cleared up with topical medications. This technique can cause scarring.
Steroid injection: Nodular and cystic lesions can be treated by injecting a steroid drug directly. This therapy has resulted in rapid improvement and lowered pain. Side effects may include thinning of the skin in the treated area.